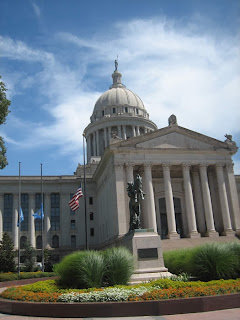 OKLAHOMA CITY (AP) - The parents of autistic children are asking state lawmakers to require health insurers to pay for the diagnosis and treatment of the developmental disorder.
Parents appeared before the House Economic Development and Financial Services Committee Thursday as lawmakers opened hearings into the nature of autism and the availability of treatment options in Oklahoma.
Wayne Rohde, father of a 10-year-old autistic child, says he hopes the hearings will lead to legislation to mandate autism coverage by health insurers. Similar mandates have been passed in 18 other states.
Legislation known as Nick's Law, named for Rohde's son, was passed by the Senate last spring. But the House refused to hear it after opponents claimed the mandate would drive up the cost of health insurance and make it unaffordable.
Posted by Wayne Rohde at 10:02 PM