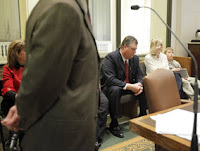 He says he didn't expect much support for insurance coverage for the condition but that lawmakers' comments were harsh.

Wayne Rohde reacts after House Bill 1312, which would require insurance coverage for autism, was rejected Tuesday at the state Capitol in Oklahoma City. The bill, also called Nick's Law, was named after Rhode's 11-year-old son, Nick, who has autism. BRYAN TERRY/The Oklahoman

Wayne Rohde knew that the conservative group he talked to Wednesday would be cool to his efforts to get legislation passed to require insurance companies to provide coverage of treatment for autistic children. But some of their comments caught him by surprise.

Some members of the Oklahoma Conservative Political Action Committee suggested to Rohde, whose 11-year-old son, Nick, is autistic, that families with autistic children should form a nonprofit organization and seek donations or get together and self-insure the payments that cost some families about $5,000 a month.

Many in the group, made up of conservative Republicans and libertarians, said they opposed the concept of state government interfering with a private industry.

One person doubted the costly behavioral treatments, saying a cream applied to a child's temples could be more effective. Another suggested that Rohde, who moved to Oklahoma 11 years ago, move back to the state where he was born and let that state take care of his family's needs.

When Rohde told the group that eight states already require insurance companies to cover autistic children, Charlie Meadows, the group's leader, asked what is wrong with families with autistic children moving to states that have passed insurance mandates.

Rohde, of Edmond, said some parents have resorted to doing that — and to taking the income taxes and other taxes they paid to the state with them.

Rohde said afterward that he doesn't know whether
he made clear his message that allowing insurance companies not to cover autistic children eventually would cost taxpayers.

A proposed bill named for Rohde's son was defeated Tuesday by a House committee. Opponents said they were concerned that forcing insurance companies to pay for autism coverage would drive up insurance costs and force some Oklahomans to drop their insurance.

A study paid for by the House showed that the costs of an autism insurance mandate would lead to at least a 7.8 percent increase in rates for insured Oklahomans.

Autism affects children in different levels, and the sooner autistic children can be diagnosed and treated, the better their chances of improving, Rohde said.

Because treatment can be expensive, middle- and lower-income families will have to depend on the state's child health-care program and public schools to provide treatment, he said.

Without early, aggressive treatment, autistic children will continue to be dependent on their parents, and after the parents die, they likely will become wards of the state, he said.
Posted by Wayne Rohde at 6:09 PM