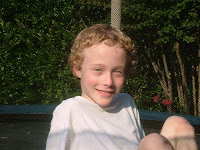 The Rohde family said the $40,000 per year they are forced to spend out of pocket on Nick's treatments, including special therapy session, have gotten to be too much.

Wayne Rohde is sad his family has to leave Oklahoma but said his son Nick will receive better treatment in Minnesota because there are more therapists and medical staff equipped to handle autism cases in states that have coverage mandates.

The Rohde family has spent years leading the fight to get autism covered by Oklahoma insurance companies, but they say they cannot afford to fight any longer.

Oklahoma's autism coverage mandate effort is called Nick's Law. It's named after Wayne Rohde's son Nick. The Rohde family said the $40,000 per year they are forced to spend out of pocket on Nick's treatments have gotten to be too much.

"We knew we were in trouble financially. We were selling off everything we have just to support what happens here. You don't have assets. You liquidate everything. We liquidated our retirement accounts," Rohde said.

It's why the family will move to Minnesota by the end of July where the state is more autism friendly.

"We don't want to leave. It's bittersweet, but we have to. Nick's going to be doing so much better," Rohde added.

He said that's because there are more therapists and medical staff equipped to handle autism cases in states that have coverage mandates.

According to Autism Speaks, Oklahoma is now one of only five states to have not pursuing autism insurance reform. The Rohde family said being forced out of their home is not what Oklahoma is or should be known for.

"Oklahoma is much better than that, but unfortunately politics is getting in the way of decency," said Rohde.
Posted by Wayne Rohde at 1:41 PM